Against the Odds 29 Buffalo Wings Reprint 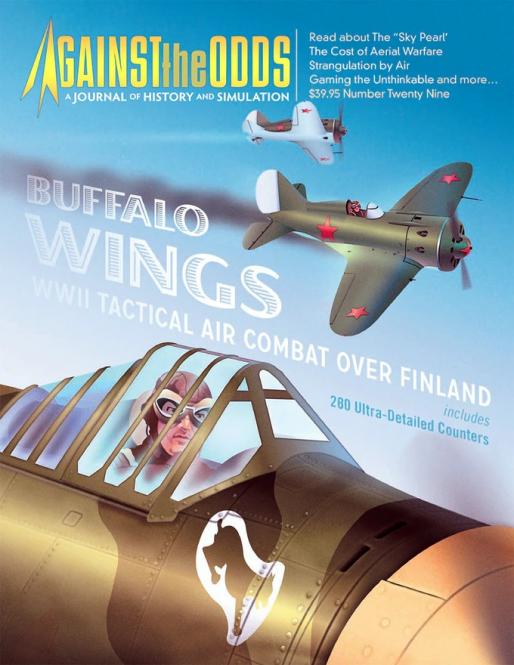 Issue #29, "Buffalo Wings" covers the "Winter Wars" between Finland and the USSR, sometimes independent and then as part of WW2. The title comes from a plane -- the Brewster Buffalo-- which was woefully unsuccessful when used by US and British forces, but which the Finns adapted into a very useful fighter, which they nicknamed the "Sky Pearl." (Yeah, they liked it a lot!)

Buffalo Wings was also popular because it served as an 'intro' game to the entire "Fighting Wings" series-- games from J.D. Webster that are among the most popular air battle board games of all time.  Though presented as an 'easy intro' to the series, the cards and materials are fully compatible with the entire Fighting Wings series, so if folks want to get deeper and into more complexity, they can still use everything they get in Buffalo Wings.

Good question. At first we said ""Yes and No," because we were thinking most of the magazine articles would be kept just like the original but there would be a number of changes to the GAME portion. On further review, our artist is laying things out somewhat differently, adding more art, making it more attractive. And yes, the rules portion is getting a big lift, with some editing to the rules to cover questions and errata plus streamlining and improvements that the designer has forged into the system as the game evolved over the years.  So it's an understatement to call this a 'reprint.' It's a full upgrade!

Even better, we will be looking to include more "Aircraft Data Cards" (the handy charts which capture everything that makes one plane different from another) than in the original Issue #29, plus bringing in ways to make the bombers in the game perform as individual planes (they were rather generic in the original).

We will also be removing an article that provided an "expansion" for another game in our line and using those pages for more Buffalo Wings material, PLUS this change gives us 20 more counters available, which are all now focused on adding more STUFF to Buffalo Wings!

We will also be making some improvements to the counter sheets, especially all the things that aren't airplanes. You can spot some in the art above. Tanks and artillery that aren't just "symbols." Ground terrain that looks like STUFF!

Buffalo Wings 2 captures a cool, unusual period in WW2 history (with great historical articles in the magazine!). It's a great intro to one of the most popular air combat games, and brings with it upgrades to rules, art, components, and more.

We upgraded the original map, and added a “blue sky” map to the back side (compatible with the Clash of Arms' Wings of the Motherland release that covered the entire Eastern Front air war.)

Upgraded counters, plus additional plane charts that give you interesting variants of the planes and means lots more playability. You will pit Brewsters, Hawks, Me 109s, and other Finnish planes against a diverse sample the Soviet air force, from I-16s and LaGGs to MiGs, Yaks, Pe2s, and more. Full-color rules and cover stock charts are both real upgrades to play.

While the Finns were "co-belligerents" of the Nazis in "The Continuation War," the symbol on their planes (and elsewhere) predates the Third Reich and has nothing to do with National Socialism. Some of the earliest planes used in Finland's struggle for independence and self-determination (1919!) were donated by Swedish Count Eric von Rosen, another pilot who used the symbol as a personal good luck charm. The "hakaristi" was an already well recognized symbol in Finland, so it was used officially until the end of WWII.

Buffalo Wings and issue #29 of ATO: